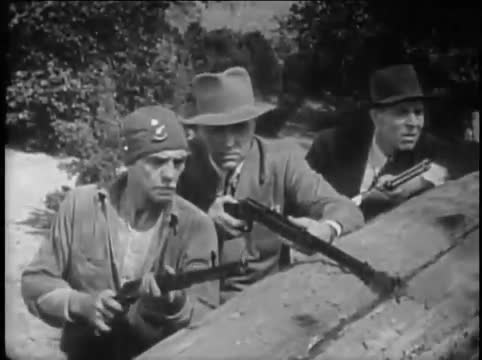 The Mystery of the Riverboat (1944) - Chapter 13: The Boomerang
Universal failed to follow the cardinal rule -- keep it simple, stupid -- and the result is this serial with an unusually large cast, multiple competing villains and a plot that may have been too complex and too adult for Saturday matinee kids to follow. The actual riverboat visuals are provided by stock footage from an unnamed film. Mantan Moreland is on board for more than comedy relief.

Directed by Lewis D Collins & Ray Taylor
Released in 1944
Complete prints
a.k.a. "The Mystery of the River Boat"

TRIVIA: Six film editors worked on this production. The car Marjorie Clements (Jenny Perrin) drives in the last few chapters is the Black Beauty from "The Green Hornet" (1940) and "The Green Hornet Strikes Back" (1940)

CHAPTER TITLES: 1) The Tragic Crash 2) The Phantom Killer 3) The Flaming Inferno 4) The Brink of Doom 5) The Highway of Peril 6) The Fatal Plunge 7) Toll of the Storm 8) The Break in the Levee 9) Trapped in the Quicksands 10) Flaming Havoc 11) Electrocuted 12) Risking Death 13) The Boomerang

Intel/Toshiba Film: The Power Inside, Episode 1

Intel and Toshiba Film: The Power Inside 2

Where Does It All End?

Fantastic Beasts and Where to Find Them

Batman vs Superman: Dawn of Justice

Creature from the Haunted Sea