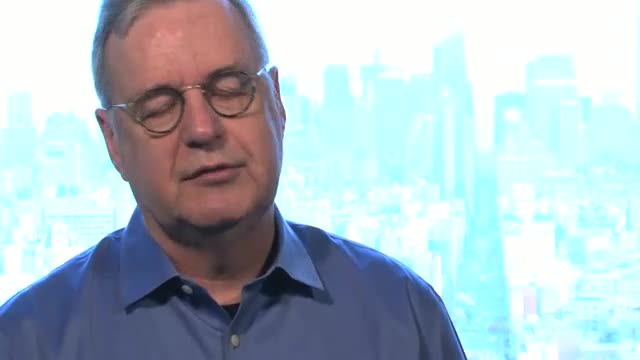 Paradigm for film, or the model for film is not exclusive, but it's the kind of thing we all kind of think about is: a 90-minute uninterrupted experience that tells a story. Now, can it be longer? Yes. Can it be shorter? Yes. But the point is it's an immersive experience, it's uninterrupted, and it's often engaged in a social way in a theatre. And I've produced movies, and yes, sitting in a movie theatre with an audience watching the movie which you've produced is both a terrifying and exciting experience. It's exciting when you feel like they're laughing at the right place and crying at the right place, and they actually have some response. Because that's what you want. It's terrifying if they don't get it, you know. But that's what happens sometimes.
I think, two things: people still want to be moved emotionally, they still want to be immersed in storytelling and they still want to have social experiences. And some of these social experiences will be in physical places. They'll continue to be in physical places which we call movie theatres. But... And those social experiences will be redefined online as well, and may not be in theatres. Or, in addition, the talking about the movie will not simply be in the movie theatre itself, or to your friends when you go home. They'll also be online. So there are various opportunities to engage people socially, physically or online, that will be combined with each other. So that you'll get the phenomena of come on down to the theatre. The filmmaker will be there. Or one of the cast members will be there. Or there will be a discussion about the movie. Or there'll be something. People are still attracted to that and still want to do that.
So I say to movie theatres: "Don't tell people not to bring their cell phones." Actually encourage them to bring their cell phones. And before the movie goes up, provide them interactive experiences by using the screen that you're not showing a movie on yet to find out more about the movie, to find out more about the filmmaker, to find out whatever it is they're interested in. Then you ask them politely to turn it off, because none of us want to be disturbed when they see the movie. And then when the movie is over, have them turn it on again to find out more if they want. In other word, use these devices to enhance the social experience. That's what they should be doing. But instead they're going: "No, no, no." Instead it again the fear. I would say, turn the fear into hope and engage. And I think filmmakers, if they're in the position... Right now, when you have more and more movie theatres that are being corked up digitally, there are opportunities now where you can come see a movie and after the film is over, you could do a Q&A with a filmmaker simulcast to hundreds of theatres, where the filmmaker's on one location, but everybody can Tweet him and ask him questions. They could do all kinds of stuff, because people want that experience. That's why film festivals are successful. They want to engage. That's not going to go away. The question is: how do you recontextualize that experience in a way that people haven't seen it before, by taking advantage of these new tools?

Intel/Toshiba Film: The Power Inside, Episode 1

Intel and Toshiba Film: The Power Inside 2

Where Does It All End?

Fantastic Beasts and Where to Find Them

Batman vs Superman: Dawn of Justice